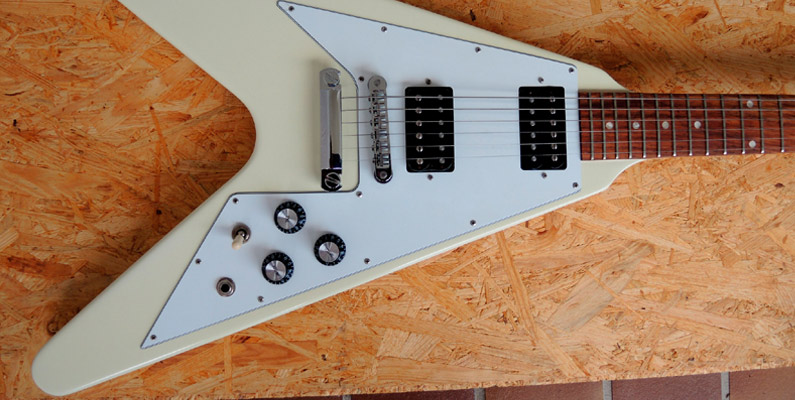 In what seems to have become something of a common occurrence in the EU, the American guitar manufacturer Gibson follows in the wake of Adidas and McDonald’s as the next big business to fall foul of EU trademark rulings.

The bone of contention was with one guitar in particular: the Flying V. Known for its striking V-shaped design, it’s a model first introduced by Gibson way back in 1958. Its strings have been peen picked by everyone from Jimi Hendrix to Lenny Kravitz and Keith Richards, and the V found its enduring fame as the weapon of choice for renowned metal bands such as Metallica and Megadeth.

The legacy it has built over decades however, was still no match for the EU courts, who ruled against Gibson on the guitar’s body shape, declaring that “there has been no demonstration of distinctive character acquired,” and crucially, “that when the application for registration of the challenged mark was filed, the V-shape did not depart significantly from the norms and customs of the sector”.

Time is no match for trademarks rulings

Yes, despite the rich history of the Flying V, the crux of the matter is that Gibson, despite all the power it wields, waited too long to file their trademark in the EU. They initially filed a patent application back in 2010, but this was challenged in 2014 by the German bass guitar manufacturer Warwick, who submitted hundreds of guitar magazine images showing the V shape being used by a multitude of other guitar companies.

The second chamber of the EU court ruled that despite Gibson originally creating the shape over 60 years ago, any claim to its originality has since vanished with the glut of V-shaped choices on the market.

What can we learn?

Whether your business has been operating a day or a decade, the importance of registering trademarks early cannot be underestimated. When you’re a huge company like Adidas or Gibson, a ruling against you is a real sting, but it’s usually manageable for them to pay the big bucks fighting all the way to the wire.

For smaller businesses however, the potentially huge legal costs can sink the ship, and many a business has been lost at the bottom of the trademark ocean.

In addition, the case highlights just how important it is to register trademarks in every market you plan on targeting. When it comes to registering a trademark in Taiwan or China, businesses need to recognise that although registered trademarks in other countries may favour your case for claims, those trademarks alone are not enough to provide the protection you need when operating in the Far East.

Gibson lives to fight another day, which it needs to, as it’s now got problems on a different front, fighting another alleged trademark infringement in the US courts. If you’re a startup or business that has questions about protecting your brand or intellectual property, or are looking into registering trademarks in Taiwan or China, get in touch, we’d be more than happy to help.