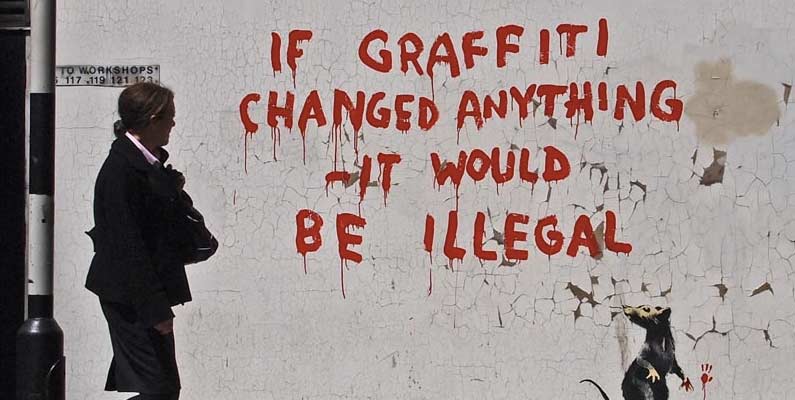 Everyone likes to receive a personalised greetings card with their name on it, but in the case of UK graffiti artist Banksy, an unnamed greetings card company has taken this sentiment a few steps too far. They’re using his name and art on their cards without his permission, and it’s forced Banksy to take unconventional action to stop it.

Banksy has decided to open up his own homewares store in London’s Croydon, called Gross Domestic Product, in the site of a former carpet shop. Even though it’s a physical, bricks and mortar store, it will never actually open its doors, with all sales being made online.

Banksy, known for his anti-capitalist, anti-establishment stencils, has said it’s “possibly the least poetic reason to ever make some art”, stating the reason he’s been forced to do it:

“A greetings card company is contesting the trademark I hold to my art and attempting to take custody of my name so they can sell their fake Banksy merchandise legally.” 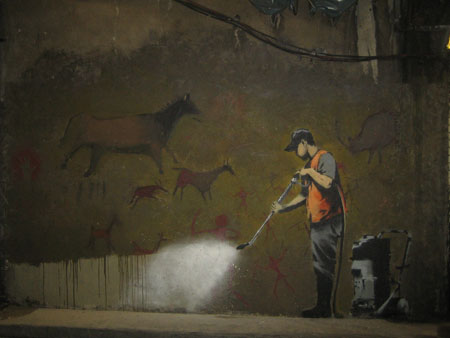 As Banksy has famously remained anonymous throughout his career, it seems the greetings card company were expecting him not to attend court to defend himself over any dispute. But when the desire to remain anonymous is weighed against the desire to retain ownership of your work, it seems like ownership is the winner.

The card company hasn’t had their name revealed by Banksy, possibly because doesn’t want to give them the attention that results in more sales of his artwork. However, on the EU Intellectual Property Office website, it reveals that an invalidity action has been filed against Banksy trademark by a card company called Full Colour Black.

It seems the card company isn’t going to back down without a fight, with their attorney saying Banksy’s pop-up store “doesn’t stand up to scrutiny from anyone with a modicum of knowledge of trademark law”. In fact, he believes it could make Banksy’s case worse:

“This has strengthened the arguments that the trademark are a false attempt to monopolise his work in bad faith [and to] circumvent copyright law and trademark law. Banksy may be a subversive character but the same law applies to him.”

Whether Full Colour Black wins the Trademark dispute remains to be seen, as it will be down to the court to decide whether Banksy’s use of the trademark is deemed genuine. But unlike last year’s infamous Sotheby’s auction, Banksy will be unable to put this case through a shredder.