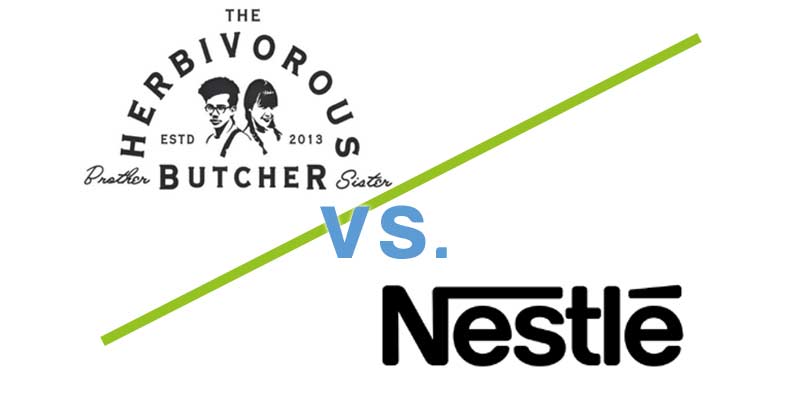 Vegetarian company does battle with Nestle over brand phrase

Vegan and Butcher are two words you don’t hear put together all that often, unless there’s a heated debate between a carnivore and a herbivore, but it’s these two words that have struck a bone of contention and lit the touch paper for a trademark battle between a small startup company and the mighty corporation that is Nestle.

The Herbivorous Butcher is a vegan food business based out of Minneapolis, and they’re going up against Nestle to win the right to the phrase “Vegan Butcher”.

The foundations for the dispute were laid back in 2017, when the family-run business Herbivorous Butcher applied to the four phrases to use in their marketing, “Meat-Free Meats,” “Sister Butcher”, “Brother Butcher” and “Vegan Butcher”. The first three trademarks were granted without note, but the Vegan Butcher trademark was denied on the grounds that the term was deemed to be ‘merely descriptive’ under the federal Trademark Act.

Assuming that the term could not be trademarked by anyone else, Herbivorous Butcher continued to use it in their marketing. However, six weeks after their request for Vegan Butcher had been denied, the multi-national corporation Nestle applied for the exact same trademark. This time, it was granted.

Needless to say, The folks behind The Herbivorous Butcher were not best pleased. Aubry Walch and her brother Kale began their business at a farmers markets back 2014, and Aubry said she was dismayed as to why Nestle managed to acquire it:

“For some reason it was denied for us, but not for them. There are a lot of vegan butcher shops across the United States. We’re all a part of the same team. We just don’t want a largest company in the world to come in and say we’re going to take ‘The Vegan Butcher.’ It felt suspicious that it was immediately OK for them, but not for us.”

Feeling wronged, The Herbivorous Butcher have filed their opposition to the trademark, and are now going through the dispute process which may lead to a lengthy court case. They have vowed to fight for the right to use the ‘Vegan Butcher’ term for as long as it takes.

The Herbivorous Butcher company did a lot of things right. They checked to see terms weren’t being used already before they decided to use them in their marketing and apply for their trademarks, which is so often not the case. However, things still went awry.

With the company quite rightly feeling like they’ve been unnecessarily aggrieved, this dispute is now emotionally charged and being fought on a matter of principle more than anything else, with founder Kale Walch stating “they can drag us through court until our great-grandchildren die, it’s still a cause worth fighting for.” The battles they choose to fight are entirely up to them, but in terms of business and profits, others may ponder whether the battle is worth it if it goes to court.

Remove the principle, and the fact remains that this could take a long time to resolve, which is all time and effort they are not spending on their company. The vegan business will be going up against a corporation that can afford to pay the best lawyers hundreds of dollars per hour. Kale and Aubrey Walch may have a decent chance of winning in the long run, but even if the odds are in their favor, is it worth it when calculating what happens if they lose, or the time and effort it will take? Put simply: is the juice worth the squeeze?

Want to read more about this?